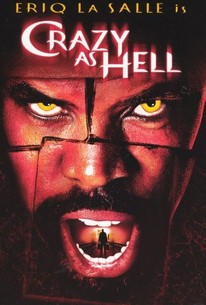 A psychiatrist confronts a new client whose problems may not be all in his head in this drama. Dr. Ty Adams (Michael Beach) is a well-known psychiatrist who has earned no small amount of controversy for his blunt and "anti-medicinal" approach to treatment. Adams is also dealing with some emotional problems of his own after the death of his wife and child. Parker (John C. McGinley), a documentary filmmaker, has arrived at the hospital where Adams works to make a movie about his work, just in time for Adams to start working with a new patient -- a mysterious and angry fellow known only as "The Man" -- who insists he is Satan (Eriq LaSalle). The new patient is not easily convinced that he's delusional, and as he becomes a greater disruptive force, Adams can't help but wonder if maybe the stranger is telling the truth. Crazy as Hell was directed by actor Eriq LaSalle, who plays the new patient and is best known for his work on the television series E.R.; it was his first theatrical feature, after helming the made-for-cable Rebound.

Eriq La Salle
as The Man

Ray Xifo
as Selden
View All

Critic Reviews for Crazy as Hell

Audience Reviews for Crazy as Hell