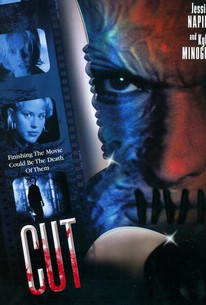 Molly Ringwald stars in this Australian Scream-like horror flick that lodges a tongue in the cheek as much as a knife in the gut. The film opens in 1988 when director Hilary Jacobs (Australian uber-icon Kylie Minogue) is working on a slasher movie called "Hot Blooded" starring plucky American icon Vanessa Turnbull (Ringwald) as a teen who is being chased by a psycho with a mask and some wicked cutlery. After the climactic scene is shot, Jacobs shouts "Cut!" and then harangues the actor playing the killer. That night, the actor stabs the director and almost offs Turnbull. The film is never completed, and when a male director who takes over the project ends up dead too, "Hot Blooded" achieves a hallowed status in student film legend. Fast forward to the present -- Jacobs' assistant director Lossman (Geoff Revell) teaches at a film school and tells his favorite students -- Raffy Carruthers (Jessica Napier) and Hester Ryan (Sarah Kants) -- of his experiences on the doomed set. Raffy, who is itching to be the next Jane Campion, sets out to finish the notorious flick. She enlists Hester as a producer, assembles a crew of fellow students and manages to get Vanessa Turnbull, who hasn't worked much lately, to revisit her role as the film's main character. Of course, as soon as shooting commences, the killing begins anew.

Tiriel Mora
as Projectionist
View All