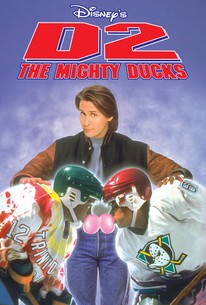 In this family film, that fledgling flock of unlikely hockey players the Mighty Ducks returns beat the feathers off the opposing teams in the Junior Goodwill games. It all begins when Gordon Bombay, recently thwarted by injuries after he attempted a comeback in pro hockey, is approached by a major sportswear corporation. They want him to reassemble the disbanded Ducks and have them compete in the Goodwill games. Bombay agrees and hits the New York streets to round up his former team. He also successfully adds new players including a super fast skater who cannot stop, and an excellent girl goalie. Once again the bumbling kids must learn to overcome their many differences and work together as a team. They are assisted by a pretty school teacher who travels with them. She and Bombay have a fling along the way. When the team finally makes it to Anaheim for the games, they quickly beat the best teams and finds themselves facing the invincible team from Iceland. They eventually win out, but the victory isn't easy as the Icelanders play hard and dirty.

Michael Tucker (I)
as Tibbles

Vincent A. Larusso
as Adam Banks

Kareem Abdul-Jabbar
as Celebrity at Party

Cam Neely
as Celebrity at Party

Chris Chelios
as Celebrity at Party

Steven Brill
as Celebrity at Party

Luc Robitaille
as Celebrity at Party

Greg Louganis
as Celebrity at Party

Kristi Yamaguchi
as Celebrity at Party

Leah Lail
as Terry at Party

Wayne Gretzky
as Himself

Jeannette Kerner
as Woman at Boutique

Mary Brill
as Woman at Boutique

Joe Fowler
as Reporter at Anaheim

Adam A. Labaud Jr.
as Doo-Wop Singer
View All