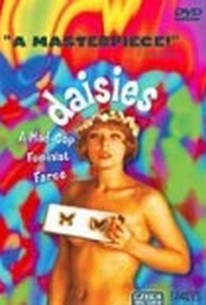 Stylistically anarchic and spiritedly played, Daisies is a liberating rebuke of polite society that will bring the rebel out of viewers who are up for the freewheeling ride.

An exercise in avant-garde cinema that is freshly humorous and accessible, Daisies is a dark comedy that eschews a traditional narrative for a Dadaist construction of events. Perpetually dressed in vibrantly corresponding costumes and dark black eyeliner, Marie and Marie work together to create mischief. Seeing the world ruined and values worthless, they decide to "go bad." They stage various dinner dates with stale old men, eat and drink merrily while telling lies, and, in a fast-motion Chaplinesque bit of slapstick, they hop trains and lose the men. Always looking for new adventures, the girls get drunk at a nightclub and get kicked out in a grand physical comedy style. They sit around their apartment and destroy things with a deadpan whimsy, apathetic to the men professing their love. Pursuing adventure about town, the two Maries take a dumbwaiter up to a banquet hall and proceed to delightfully demolish it. Using both black-and-white and color film stock, the girls' antics are enhanced by innovative special effects and camera tricks by cinematographer Jaroslav Kucera. Historically a key film in the Czech New Wave movement, Daisies was banned and director Vera Chytilová was forbidden to work until 1975. ~ Andrea LeVasseur, Rovi