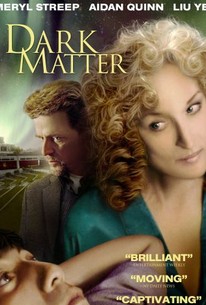 The creaky plotting, inscrutable characters, and unconvincing ending make it difficult for audiences to connect with Dark Matter.

Inspired by actual events, director Chen Shi-Zheng's socially conscious psychological drama follows the journey of an ambitious Chinese scientist working towards his Ph.D. in America, only to be marginalized to the extent that he ultimately loses his way. All Liu Xing (Liu Ye) ever wanted was to study the origins of the universe at a Western university. Upon arriving at the school, Liu immediately rents a modest apartment with a few other Chinese students and begins flirting with the pretty American who works at the local coffee shop. Personally welcomed into Department Head Jacob Reiser's (Aidan Quinn) select cosmology group, Liu remains dedicated to his studies and optimistic about the future. Things continue to look up as Liu becomes close with wealthy university patron Johanna Silver (Meryl Streep) after the two become acquainted at an orientation for foreigners sponsored by a local church. Eventually, Liu becomes Reiser's protégé, and makes a sizable impression at a prestigious conference attended by the pair. But attitudes start to shift when Liu's studies in dark matter come into direct conflict with his mentor's prominent theories and well-established studies. His excitement about a potential breakthrough causes him to ignore repeated warnings that he must pay his dues, and Liu's findings are eventually eclipsed by that of more studious fellow student Laurence. Determined to have his studies published, Liu goes behind Reiser's back, but he ultimately becomes the target of ire rather than accolades, with Johanna's naïve encouragement prompting him along a dangerous collision course. While Liu remains enamored with the concept of the American dream and optimistic about American science being a free market of ideas, he begins to grow dejected after his dissertation is rejected, the girl at the coffee shop blows him off, and his roommates all find lucrative jobs. Essentially left behind at the university, Liu rejects Johanna's offer for help and vows not to return home to disappointed parents. Now, as he coasts on the fumes of his unrealized dreams, the dishonored student prepares to lash out with one final act of devastating annihilation. ~ Jason Buchanan, Rovi

He Yu
as Old Wu

Sina Amedson
as Selim
View All