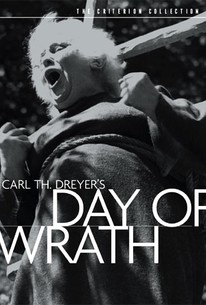 Beautifully filmed and rich with period detail, Day of Wrath peers into the past to pose timelessly thought-provoking questions about intolerance and societal mores.

Danish director Carl Theodor Dreyer's Day of Wrath (Vredens Dag) is set in 1623 Denmark, where Anne Pedersdotter (Lisbeth Movin), the second wife of a Danish pastor, grows to loathe her husband for his self-asceticism and instead falls in love with the minister's son - with whom she spends an inordinate amount of time. Locals overhear her wishing aloud for her husband's death; when he dies of a stroke not long after, she is accused of witchcraft, a charge taken seriously enough to be punishable by death. Eventually, the poor woman is tortured and traumatized to such a point that she actually believes she is a witch - and she gives in to being burned at the stake. Yet Dreyer then shifts the perspective from internalized - illustrating the woman's paralyzing fear - to externalized, a point of view that enables the director to depict his subject's spiritual purification. Even allowing for the aura of raw terror, Dreyer never loses sight of the eroticism inherent in the concept of witchcraft. Based on a play by Wiers Jensen, Day of Wrath was filmed during the Nazi occupation of Denmark and not released abroad until after the war, and the director reportedly had to flee his native country when he angered the government with the film's political content. ~ Hal Erickson, Rovi

Albert Høeberg
as The Bishop

News & Interviews for Day of Wrath

Critic Reviews for Day of Wrath

Audience Reviews for Day of Wrath