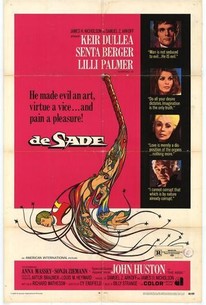 Keir Dullea dives into a bevy of babes with an open wine bottle as the notorious Marquis de Sade in this low-budget debauch from American International Pictures -- purveyors of fine entertainment morsels for the connoisseur. The film takes place as an extended flashback after de Sade has escaped from a madhouse and taken refuge in the dilapidated mansion where he was reared. In his flashback, de Sade recalls how the Abbe de Sade (John Huston) used to have a maid whip him until he began to like it. Of course, after that, the next step down the primrose path was flagellation and orgies. Finally sent to a French jail for lewd behavior, de Sade begins to write anti-government creeds to while away the hours. After his release, he is compelled to marry the repulsive Renee de Montreuil (Anna Massey). De Sade goes along with the marriage in order to get closer to her sister Anne (Senta Berger). In spite of that, de Sade continues to seek out various forms of softcore sex. But then the Black Plague hits.

John Huston
as The Abbe

Max Kiebach
as De Sade as a Boy

There are no featured audience reviews for De Sade at this time.