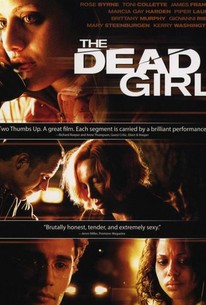 This dark thriller boasts a fresh approach, but it can still get bogged down by its heavy subject matter.

"The Dead Girl" is a quintet of stories about seemingly unrelated people whose lives converge around the murder of a young woman. "The Stranger" is about the woman who finds the body. "The Sister," a forensics graduate student, is torn between her mother's pressure to hold onto hope for her abducted sister's return and her longing to move forward with her own life "The Wife" is trapped in an intense hate/love relationship with her husband. A terrible discovery about his connection to the dead girl's murder forces her to confront what she though she knew about him--and herself. "The Mother" searches for answers about her runaway daughter's life and is confronted with a series of revelations that change the course of her own life. "The Dead Girl" is a fireball: hyper, volatile, self-destructive and subject to hair-trigger bursts of uncontrollable rage. She also has an innocent and child-like side. She dreams about improving her life and becoming a good mother to her young daughter. These characters are linked not only by their connection to a brutal murder but also by the difficult hand that life has dealt them. The film scrutinizes their inner struggles to overcome or surrender to their misfortunes.

Gillian Pernoll
as Ashley
View All

News & Interviews for The Dead Girl

Critic Reviews for The Dead Girl

Audience Reviews for The Dead Girl