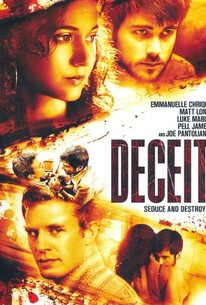 Money, deception, and obsession form the basis of this simmering psychological thriller concerning a man who enters into a dangerous extramarital affair, only to find that nobody is who they appear to be. Returning home with his girlfriend in order to attend his father's funeral, Dave Ford is comforted to be back in the company of his former best friends Emily and Brian Nicholson. Back in the day, Dave, Emily, and Brian were inseparable; these days his former friends have married and gotten off to a great start in life. When Emily and Brian offer to help Dave restore his childhood home, the old friends instantly pick up where they left off years ago. Everything is perfect until Emily and Brian's relationship turns suddenly violent and Emily knocks on Dave's door seeking shelter from her abusive husband. Before long, Emily and Dave have entered into a passionate affair, with frequent warnings from another old friend that Emily is not who she appears to be continually falling of deaf ears. But the truth has an uncanny way of coming out at the most inopportune times, and now as jealousy flares and relationships unravel Dave becomes hopelessly locked into a deadly game of treachery and deceit.

Ryan Devlin
as Patron
View All

There are no critic reviews yet for Deceit. Keep checking Rotten Tomatoes for updates!

There are no featured audience reviews for Deceit at this time.