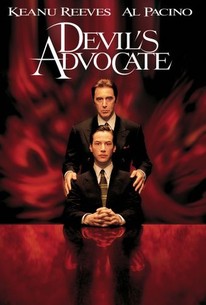 Though it is ultimately somewhat undone by its own lofty ambitions, The Devil's Advocate is a mostly effective blend of supernatural thrills and character exploration.

Supernatural forces hover over the courtroom in this devilish drama adapted from the novel by Andrew Neiderman. Attorney Kevin Lomax (Keanu Reeves) doesn't heed the Bible-based warnings of his mother (Judith Ivey), who views New York City as "the dwelling place of demons." Instead, he leaves Gainesville, Florida, with his wife Mary Ann (Charlize Theron) to put his legalistic skills to the test at a leading Manhattan law firm run by John Milton (Al Pacino). It all goes smoothly -- with Milton urging them to stay, putting Kevin on a $400-per-hour salary, and moving the couple into a luxurious apartment in his own building on Fifth Avenue -- where Mary Ann falls under the influence of neighbor Jackie (Tamara Tunie). After Kevin defends a weird animal sacrificer (Delroy Lindo, uncredited), he moves up to an important case with an apparent murderer, real-estate tycoon Alexander Cullen (Craig T. Nelson). Ignored by Kevin, the troubled Mary Ann has some disturbing experiences, verging on the occult, while Kevin, at work, becomes attracted to redhead Christabella (Connie Neilsen). Dazzled by his entrance into paradise, Kevin doesn't grasp who handed him this Big-Apple success. Could it be...Satan? The film features demonic creatures by Rick Baker. Cameos (Senator Alfonse D'Amato, Don King, others) add to the ambiance of ambition and power in the canyons of Manhattan. ~ Bhob Stewart, Rovi

Don King
as Himself

Fenja Klaus
as Female No. 1

Marcia DeBonis
as Nurse No. 2

Harold Surratt
as Orderly No. 1

Alfonse D'Amato
as Himself

Ambassador Charles Gagano
as Himself

Lou Rudin
as Himself

Alan Grubman
as Himself

Ernie Grunseld
as Himself
View All

News & Interviews for The Devil's Advocate

Critic Reviews for The Devil's Advocate

Audience Reviews for The Devil's Advocate