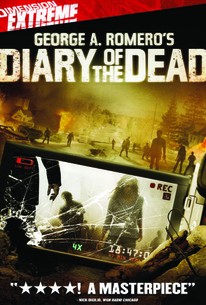 Diary of the Dead

As Diary of the Dead proves, time hasn't subdued George A. Romero's affection for mixing politics with gore, nor has it given him cinematic grace or subtlety.

Diary of the Dead Photos

Horror icon George A. Romero effectively hits the "reset" button on his hugely influential Dead series with this scaled-back look at the zombie apocalypse as told from the perspective of a student filmmaker who sets out to shoot a low-budget fright film, but instead captures the breakdown of modern society at the decaying hands of flesh-eating ghouls. Jason Creed (Joshua Close) and his crew are shooting a mummy movie in the Pennsylvania woods when media reports begin pouring in about the dead rising from their graves to feast on the flesh of the living. While self-centered star Ridley (Phillip Riccio) beats a hasty retreat to his family's fortified mansion halfway across the state, the remaining cast and crew are forced to fight for their lives despite having no weapons to speak of, and only a wobbly recreational vehicle in which to seek shelter. Immediately recognizing the gravity of the situation and outspokenly skeptical of the media, determined director Creed decides to use his own camera to capture the real story in a documentary entitled "The Death of Death." Now, as the group attempts to fight their way to safety, the skeptics will all watch as their greatest fears become reality, and the realists will attempt to process a nightmare that modern science would pass off as impossible. ~ Jason Buchanan, Rovi

News & Interviews for Diary of the Dead

Critic Reviews for Diary of the Dead

Audience Reviews for Diary of the Dead

Diary of the Dead Quotes