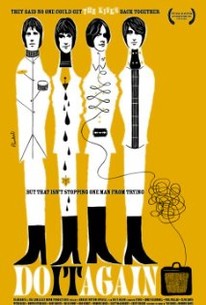 Do It Again Ratings & Reviews Explanation

It is a quest. Geoff Edgers, a newspaper reporter dreading the approach of his 40th birthday, decides to take a most improbable leap. He sets out to find the still-surviving members of the long dormant British rock band, the Kinks ("You Really Got Me," "Lola" and "Come Dancing"), to convince them to reunite. Never mind that he's an American with just one connection to Kinks leader Ray Davies and his younger brother Dave: Edgers grew up loving their music. When his initial mission fails, Edgers turns the film into a meditation on the power of music and his own chance to testify on his love for the Kinks. He also meets with Kinks fans that include Sting, Zooey Deschanel, REM's Peter Buck, Paul Weller, Robyn Hitchcock and Clive Davis. There are other movies about music. But there's nothing quite like "Do It Again," a kind of "Sherman's March" - with guitars. Director Robert Patton-Spruill ("Squeeze," "Public Enemy: Welcome to the Terrordome") follows Edgers from Boston to California, from Las Vegas to New York City. --© Official Site

Critic Reviews for Do It Again

Audience Reviews for Do It Again

There are no featured audience reviews for Do It Again at this time.

Do It Again Quotes