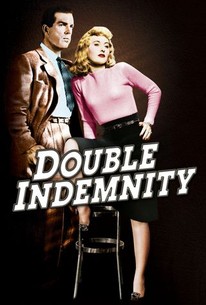 2:54
Double Indemnity: Official Clip - I Love You Too

1:55
Double Indemnity: Official Clip - How Fast Was I Going, Officer?

2:52
Double Indemnity: Official Clip - The End of the Line

2:01
Double Indemnity: Official Clip - I Killed Him
View All Videos (9)

Directed by Billy Wilder and adapted from a James M. Cain novel by Wilder and Raymond Chandler, Double Indemnity represents the high-water mark of 1940s film noir urban crime dramas in which a greedy, weak man is seduced and trapped by a cold, evil woman amidst the dark shadows and Expressionist lighting of modern cities. Phyllis Dietrichson (Barbara Stanwyck) seduces insurance agent Walter Neff (Fred MacMurray) into murdering her husband to collect his accident policy. The murder goes as planned, but after the couple's passion cools, each becomes suspicious of the other's motives. The plan is further complicated when Neff's boss Barton Keyes (Edward G. Robinson), a brilliant insurance investigator, takes over the investigation. Told in flashbacks from Neff's perspective, the film moves with ruthless determinism as each character meets what seems to be a preordained fate. Movie veterans Stanwyck, MacMurray, and Robinson give some of their best performances, and Wilder's cynical sensibility finds a perfect match in the story's unsentimental perspective, heightened by John Seitz's hard-edged cinematography. Double Indemnity ranks with the classics of mainstream Hollywood movie-making. ~ Linda Rasmussen, Rovi

Betty Farrington
as Nettie, the Maid