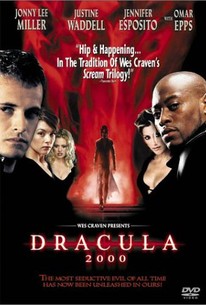 This retelling trys to offer a different spin on the origin of Dracula. Unfortunately, there's nothing here audiences haven't seen before.

In this loose reinvention of the classic Bram Stoker novel, the Count (Gerard Butler) is transplanted to the present day, after a brief prologue where Van Helsing (Christopher Plummer) captures Dracula and conceals him in Carfax Abbey, where he remains for many years. In the future, Carfax Abbey is contained within an office building where Van Helsing's been using Dracula's blood to stay alive in order to guard the evil secret. After a band of thieves, led by the malevolent Marcus (Omar Epps), attempts to seize Dracula's remains, the Count escapes to New Orleans, where Mary Van Helsing (Justine Waddell) currently resides. Mary is eventually persuaded to fight Dracula with the aid of a reluctant Simon(Jonny Lee Miller), one of Van Helsing's employees, all while trying to escape the newly-made vampires of Marcus' gang and a zealous TV reporter (Jeri Ryan). The film also features Lochlyn Munro, Jennifer Esposito, Vitamin C, and Danny Masterson in supporting roles.

Randy Butcher
as Stakeman No. 1

Bill Davidson
as Stakeman No. 2

Peter Cox
as Stakeman No. 3

Chris Lamon
as Stakeman No. 4

Herb Reischl Sr.
as Stakeman No. 5

Duncan McLeod
as Stakeman No. 6

Colleen Fitzpatrick
as Lucy
View All