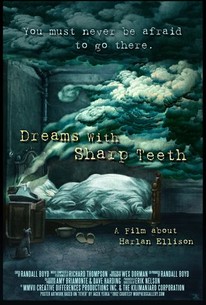 Anyone coming to Dreams With Sharp Teeth expecting a formal, traditionally organized biographical sketch of author Harlan Ellison will be disappointed. But what they will find instead is Ellison more or less unchained and ranging (and raging) across his past and into the future (circa 2007), having great fun with his many and varied targets, and giving his own accounts of some of the triumphs that people often cite in his past. Perhaps the most satisfying moment comes when the author presents his version of one portion (one of the least controversial portions) of his Hugo Award-winning script for the Star Trek episode "The City on the Edge of Forever" -- he ends up making the production crew for the series look like fools, and longing to see the story told as he wrote it. By contrast, presented without comment is one excerpt of the award-winning Outer Limits episode "Demon With a Glass Hand," which apparently was shot more or less as he wrote it. In between and around these two polar opposite successes of his early career, Ellison rails and laughs, berates and curses, and generally has a great deal of fun launching his barbs at a multitude of targets, including himself, as often as not. One eerie aspect of watching him across this fast-paced account, which covers many decades of his life, is realizing how much Ellison resembles the late actor George Grizzard as he looked and sounded from the 1960s to the 21st century -- if there was an actor who might've portrayed this unique personality in a dramatic context, it was Grizzard. But much more important than any such mundane observations is the keen appreciation that the filmmaker has for his subject, sufficient to take us on what amounts to a cinematic roller-coaster ride across one part of Ellison's psyche. That's how it's paced, and that how it's best to take in this delightfully quirky and lively nonfiction film. ~ Bruce Eder, Rovi