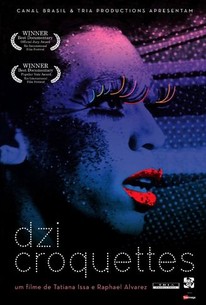 In 1964, a coup d'etat removed Brazilian president Joao Goulart from office, and a military dictatorship sprang up in his place. Brazil entered into a period of repressive politics, harsh government censorship and ugly reprisals against non-conformists and critics of the government, but a powerful voice of opposition came from a very unusual place. Lenny Dale was an American dancer and choreographer who had come to Brazil and fell in with a group of drag performers who had modeled themselves after the Cockettes, a flamboyant group of sexual anarchists who were making a name for themselves in San Francisco. Taking the name Dzi Croquettes, Dale helped transform the group into a remarkable cabaret act that used music, dance, outrageous costumes and provocative sexual ambiguity as a jumping off point for a satire of all that was repressive in Brazilian culture and a celebration of freedom from the confines of gender. Dzi Croquettes became wildly popular in Brazil, and after Liza Minnelli championed the group, they set out for a successful tour of Europe, with a run on Broadway in the offering. Dzi Croquettes never made it to America, and eventually ego, AIDS and a string of bad luck broke up the act, but for a while they were a remarkable voice of resistance and tolerance in a nation determined to beat down all opposition. Filmmakers Tatiana Issa and Raphael Alvarez chronicle the group's incredible true story in the documentary Dzi Croquettes, which was a multiple award winner at the 2009 Rio de Janeiro International Film Festival as well as the 2009 Sao Paulo International Film Festival.

If the film doesn't measure up as a piece of historical scholarship, it does manage to be a rather touching exploration of the troupe's life cycle: achieving notoriety, then being torn apart by fame, then being destroyed by forces beyond its control.

Presents a wide-ranging picture of a unique cultural phenomenon, even if subjects like Liza Minnelli too often fall into semiarticulate expressions of hagiographical awe.

It's the mind-blowing performance footage (and there's lots of it) that makes this a must-see film.

"Dzi Croquettes" is both a tribute and a terrific entertainment.

Although the film recounts an intriguing slice of social history, it is too haphazard and repetitive to be truly memorable.

Will American viewers with no familiarity of this group find much to hold their interest ...? Yes, to a point. The documentary has an ace tucked in its spangled G-string: Liza Minnelli

I have issues with the film's editing, since the information is presented in a rather clumsy, haphazard manner (not to mention the heavy-handed way the director puts herself in it), but still this is such an engaging and enlightening doc about those groundbreaking artists.