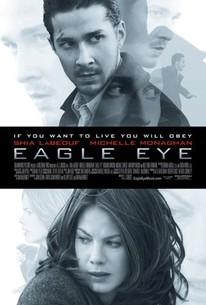 Eagle Eye is a preposterously plotted thriller that borrows heavily from other superior films.

Shia LaBeouf and Michelle Monaghan star in Disturbia director D.J. Caruso's race-against-time thriller concerning two strangers thrust together by a mysterious telephone call, and their frantic efforts to discover why they have inexplicably become the nation's most wanted fugitives. Jerry Shaw (LaBeouf) and Rachel Holloman (Monaghan) were complete strangers at the beginning of the day, but that changed the instant a strange woman called to threaten both their lives and the lives of their loved ones. Suddenly forced into a series of increasingly dangerous situations, Jerry and Rachel must now take orders from a woman who's using everyday technology to track and control their every move. As the situation intensifies and the hapless duo are deemed the country's most wanted fugitives, they must work together in order to discover who it was that turned their lives upside down, and what they can do to thwart the criminal mastermind's cunning yet diabolical plan. Billy Bob Thornton, Rosario Dawson, Michael Chiklis, and Anthony Mackie co-star. ~ Jason Buchanan, Rovi

24 Times The Government Overspent Your Money (In Film & TV)
People’s Choice Awards Winners Announced
RT on DVD: LaBeouf It Up With An Eagle Eye Christmas!
View All