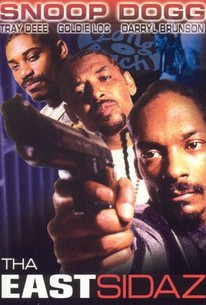 In this hard-hitting urban action story, Killa Pop (Snoop Dogg) is the leader of a Los Angeles street gang who've become a criminal force to be reckoned with. Snap (Goldie Loc) and Crackle (Tray Dee) are two of Pop's most trusted associates who've risen through the ranks to become his right-hand men. But Snap and Crackle have decided they're tired of working under Killa Pop, and frame him for murder so they can take over the operation while he's behind bars. When Killa Pop is found guilty, even though he had nothing to do with this crime, he seemingly takes his punishment like a man and behaves like a model prisoner. But Pop's docile exterior is just a ruse -- he's mapped out a plan to break out of jail, and with the help of his real friends, will bring down Snap and Crackle and regain control of his underground business. But Snap and Crackle aren't about to give up without a fight, and are willing to play dirty to stay on top. Eastsidaz also features cameo appearances from hip-hop stars Warren G., Xzibit, and RBX.

There are no critic reviews yet for Tha Eastsidaz. Keep checking Rotten Tomatoes for updates!

There are no featured audience reviews for Tha Eastsidaz at this time.