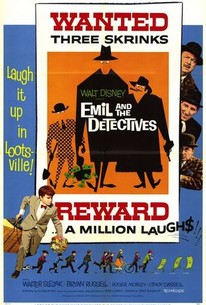 Emil and the Detectives

A criminal discovers that stealing from a child isn't as simple -- or as easy to get away with -- as he thought in this comedy-drama for the family. Emil (Tobias Retzlaff) is a 12-year-old boy who lives in Germany with his father after his parents were divorced. Emil's father, a salesman, gets in an auto accident that sends him to the hospital and costs him his driver's license for three months. With his mother living in Canada, Emil's schoolteacher arranges for the boy to stay with her sister, a fellow teacher, while Emil's father is on the mend. While taking the train to Berlin, Emil finds himself discussing his father's predicament with a stranger who broaches the possibility of selling him a phony driver's ID for his father. Emil expresses interest in the idea, which leads to the stranger robbing the young man of all his belongings. Emil, however, is too bright and resourceful to let the thief go without a fight; the lad trails the crook as he gets off the train, and with the help of a group of streetwise youngsters, Emil soon has dozens of kids in Berlin acting as his eyes and ears as they scheme to get Emil's money back. This was the fourth screen adaptation of the popular children's story Emil Und Die Detektive by Erich Kastner; the supporting cast includes Anja Sommavilla, Jurgen Vogel, and Maria Schrader. ~ Mark Deming, Rovi

Critic Reviews for Emil and the Detectives

There are no critic reviews yet for Emil and the Detectives. Keep checking Rotten Tomatoes for updates!

Audience Reviews for Emil and the Detectives

There are no featured audience reviews for Emil and the Detectives at this time.

Emil and the Detectives Quotes