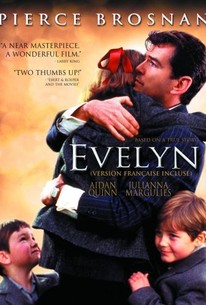 Though predictable and sometimes overly sentimental, Evelyn still manages to be heartwarming.

One man takes on the Irish family law system and the Catholic Church in a bid to be reunited with his children in this drama, based on a true story. In 1953, Desmond Doyle (Pierce Brosnan) was a house painter and decorator who, despite a strong work ethic, had a hard time holding on to steady work. Desmond's wife had grown tired of her marriage and her husband's financial problems, and one day walked away from her home, leaving Desmond to raise their three children on his own. While Desmond struggles to keep body and soul together for his children, his sporadic employment eventually attracts the attention of the law, and a court order sends his two sons and young daughter to separate Catholic orphanages until Desmond can prove he's capable of properly supporting them. However, Desmond discovers merely getting work is not enough to bring his children back to him, and when he learns that his daughter, Evelyn (Sophie Vavasseur), is having a rough time of it at the hands of several stern nuns, he becomes determined to win their custody in a court of law. Through Bernadette (Julianna Margulies), a barmaid who has caught his eye, Desmond meets Michael Beattie (Stephen Rea), a lawyer and Bernadette's brother. While Michael doesn't believe Desmond's case can be won in an Irish court, his partner Nick Barron (Aidan Quinn), an expatriate American who lost custody of his own children in a divorce proceeding, is eager to help, and they agree to take the case. However, they both realize they're fighting an uphill battle, and so they persuade Thomas Connolly (Alan Bates), a former football star who became one of Ireland's most respected barristers, to lend his knowledge and prestige to the case. Leading man Bronson also served a co-producer for Evelyn; Bruce Beresford directed, who previously collaborated with Pierce Brosnan on Mister Johnson.

Mark Lambert
as Minister of Education

Sally the Farmer's Daughter
as Slippery Sam, the Greyhound
View All