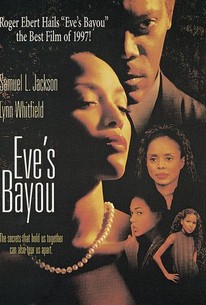 Black female writer-director Kasi Lemmons made her feature directorial debut with this period family drama set in the South. Depicting the the African-American experience with a female slant, Lemmons shunned the usual urban violence and race issues of black films for a different approach, a jambalaya of Southern gentility, bayou traditions, and voodoo visions. The Southern Gothic saga pivots around a prosperous Creole family in Louisiana during the year 1962 -- as seen through the eyes of intensely curious, precocious, and perceptive ten-year-old Eve Batiste (Jurnee Smollett). Eve's coming-of-age events are introduced through her adult voiceover narration (Tamara Tunie), which begins, "Memory is a selection of images, some elusive, others printed indelibly on the brain. The summer I killed my father, I was ten years old." Her father, Louis Batiste (Samuel L. Jackson), is the area's much-respected doctor, and the proud and beautiful Roz (Lynn Whitfield) is Eve's mother. But Louis has an eye for other women, and after Eve catches him in the barn with an attractive, married woman, Matty Mereaux (Lisa Nicole Carson), he must reassure the child that he still loves her mother. Nevertheless, Eve is shaken by what she has seen, and she tells her older sister Cisely (Meagan Good). Eve's impulsive Aunt Mozelle (Debbi Morgan), a sexy, superstitious widow with three past husbands, has taken on a new lover, Julian Grayraven (Vondie Curtis Hall). Finding her beliefs in family loyalty crumbling, the young girl visits voodoo priestess Elzora (Diahann Carroll). A Pandora's box of long-buried Batiste clan secrets has been opened beneath the shade of the magnolia trees, and Eve struggles through the summer to save her family. Filmed on location by cinematographer Amy Vincent. Actor Vondie Curtis Hall is the husband of director Lemmons. Shown at the Telluride and Toronto film festivals.

Oneal A. Isaac
as Bus Driver

Billie Neal
as Ghost of Original Eve
View All

Sing, Bill and Ted’s Excellent Adventure, Superbad and More on Netflix and Amazon Prime This Week
Total Recall: Directors Who Paved the Way for Tyler Perry
Critical Consensus: "Lady" Is All Wet; "Ex" Is Not Super; "House" Is Scary, "Clerks" Is Funny
View All