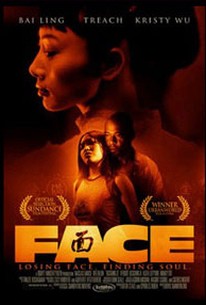 Face takes a well-meaning look at the immigrant experience whose affecting performances are often enough to outweigh its frustrating pacing and storytelling issues.

Three generations of Chinese-American women struggle to reconcile tradition and family with their own needs and desires in this independent drama from first-time director Bertha Bay-Sa Pan. In 1977, Kim (Bai Ling) is an intelligent and headstrong Asian-American, whose mother (Kieu Chinh) is eager to see married off to an eligible man as soon as possible. Kim isn't interested in settling down just yet, and is dating a bright but struggling law student, Willie (Ken Leung). Kim is making some extra money by tutoring Daniel (Will Yun Lee), a handsome but irresponsible boy from a wealthy family. Daniel seduces Kim one evening after she's had an argument with Willie, and while she has no interest in seeing Daniel again, she soon discovers that she's pregnant with his child, and both her mother and Daniel's parents insist that they marry. It doesn't take long for Kim to realize that she and Daniel don't care much for one another, and Kim decides to leave America for Singapore, leaving her baby daughter Genie in mother's care. Two decades later, grown-up Genie (Kristy Wu) is even more rebellious than her mother, and while Genie pays a modicum of lip service to her grandmother, she's no more interested in settling down with a nice Chinese boy than Kim was. Genie has been dating Michael (Treach), an African-American hip-hop musician; Michael is eager to make their relationship more permanent, but Genie isn't so sure, and her grandmother has no idea what to make of Genie's new beau. When Kim arrives on one of her infrequent visits, the three generations of this family find themselves struggling to find a common ground. Face was screened in competition at the 2002 Sundance Film Festival.

Will Yun Lee
as Daniel

There are no featured audience reviews for Face at this time.