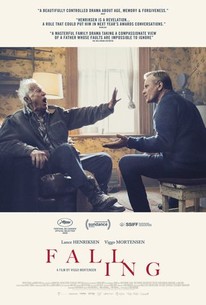 John Petersen (Viggo Mortensen) lives with his partner Eric (Terry Chen) and their adopted daughter Monica in Southern California. His father Willis (Lance Henriksen/Sverrir Gudnason) is a farmer whose attitudes and behavior belong to a far more traditional era and family model. When Willis travels to Los Angeles for an indefinite stay with John's family in order to search for a place to retire, these two very different worlds collide. Willis' behavior can be both caustic and funny -- with outbursts that shock his liberal family. This endears him to grand-daughter Monica, but it almost proves too much for John, and his sister Sarah (Laura Linney), bringing old wounds back to the surface and creating new ones along the way. With Willis' memory in rapid decline, his thoughts turn back to his first wife Gwen (Hannah Gross), a love that still consumes him a lifetime later. As father and son confront the events that have torn them apart, we see the gamut of their relationship over 40 years, and their differing recollections of John's mother, Gwen: from dark to light, from rage and jealousy through to acceptance, laughter, and hard-won grace.

There are no featured audience reviews for Falling at this time.