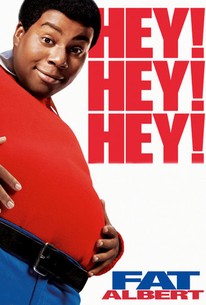 A bland but good-natured adaptation of the cartoon show.

Bill Cosby's gang of childhood pals evolve from standup comedy to an animated cartoon series to real life in this family-friendly comedy. Doris (Kyla Pratt) is a teenager who doesn't fit in with most of her classmates at school, has been depressed since the death of her grandfather, and is disturbed by her foster sister's willingness to remake herself in order to be popular. One of Doris' few solaces comes from watching reruns of the animated television series Fat Albert and the Cosby Kids, and one day while watching the show she starts to cry, with a tear dropping into her remote. The tear draws big-hearted (and just plain big) Fat Albert (Kenan Thompson) from the animated universe into Doris' real world in hopes of cheering her up and helping her deal with her problems. As Fat Albert and his pals -- Rudy (Shedrack Anderson III), Bucky (Alphonso McAuley), Mushmouth (Jermaine Williams), Weird Harold (Aaron A. Frazier), Dumb Donald (Marques B. Houston), and Bill (Keith D. Robinson) -- adapt to the three-dimensional world and try to teach Doris to believe in herself, they learn that traveling back to the animated world is harder than they thought, which becomes alarming when they start to fade away. The real world also poses some new dilemmas for Fat Albert when he falls in love with Doris' foster sister, Lauri (Dania Ramirez). Bill Cosby co-authored the screenplay for Fat Albert, using his full name, William H. Cosby Jr., and collaborating with Charles Kipps; the project was begun with Forest Whitaker as director, who left midway through shooting, with Joel Zwick taking over in his place.

Omarion
as Reggie (as Omari Grandberry)

Bill Cosby
as Himself

Take a Look at the "Casino Royale" Shoot!
Coach Carter Victorious over MLK Weekend
“White Noise” Surprises, But Fails to Dethrone “Meet the Fockers”
View All