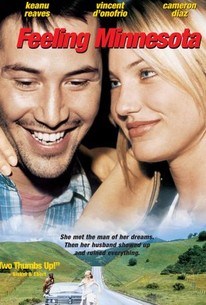 Clumsily derivative, shoddily assembled, and fundamentally miscast, Feeling Minnesota sets out for romantic comedy and gets irrevocably lost along the way.

It's not unusual in the movies for a woman to be torn between two brothers, but she usually doesn't change her mind on her wedding day. Then again, hardly anything goes the way one might expect in this black comedy. Freddie (Cameron Diaz), a pretty but hard-as-nails stripper, dreams of some day dancing in a Las Vegas revue, but for the meantime she works at a seedy dive in Minnesota. Freddie is forced by the owner of the club, Red (Delroy Lindo), to marry his accountant, the less-than-charming Sam Clayton (Vincent D'Onofrio), as punishment for supposedly stealing from the strip joint's till (as a further indignity, Red has also had the word "slut" tattooed on her arm). Sam has a rocky relationship with his brother Jjaks (Keanu Reeves) -- his curious name is the result of a typing error on his birth certificate -- but Jjaks receives an invitation to the nuptials from their mother Nora (Tuesday Weld), and he arrives at the wedding reception only a few hours after he's released from prison. When Freddie and Jjacks meet for the first time, there's an immediate chemistry between them, so immediate that before the evening is out, the new in-laws are making love in a bathroom and Freddie has persuaded Jjacks to run away with her; Freddie has also grabbed Sam's bankroll to finance the unscheduled vacation. Sam, understandably enraged, vows to track them down and enlists the help of Ben Costikyan (Dan Aykroyd), a sleazy career criminal. Feeling Minnesota was the debut feature for writer and director Steven Baigelman.

Oliver Osterberg
as Man on Phone