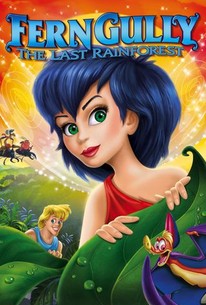 A man finds himself living among the animals and enchanted spirits of the rainforest, and learns of the true consequences of human destruction in this animated adventure. Crysta (voice of Samantha Mathis) is a young fairy who is being tutored in the powers of magic by the older and wiser Magi (voice of Grace Zabriskie) in an Amazon rain forest. While their home was once on the verge of destruction thanks to the evil spirit Hexxus (voice of Tim Curry), the demon has been trapped inside a tree, and Crysta is free to play with her friends Batty Koda (voice of Robin Williams), a bat who escaped from an animal testing facility, and Pips (voice of Christian Slater), who has obvious romantic intentions toward the attractive young sprite. However, a clear-cutting crew destroys the tranquil peace of the rainforest, and when Crysta sees a runaway logging machine about to run over lumberjack Zak (voice of Jonathan Ward), she saves his life by shrinking him to her own size. However, Crysta isn't able to bring Zak back to his normal size, so he's forced to live among the forest creatures and learn first-hand the devastation the humans have brought to this world -- especially when the loggers accidentally free Hexxus from captivity. ~ Mark Deming, Rovi

Samantha Mathis
as Crysta
View All