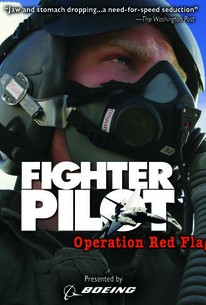 At Red Flag, the international training exercise for the air forces of allied countries, hundreds of pilots meet for the most challenging flying of their careers. The object is to make the exercises as real and challenging as possible -- to take the pilots, ground crews, mechanics and rescue personnel to the limits of what they can handle. The film follows Captain John "Otter" Stratton as he makes his way through this extraordinary event held in the desert of Nevada. As he participates in the exercise, he realizes that being a hero is not quite as simple as he once believed. He notices team members who work all night rebuilding engines and re-installing them into his aircraft so he can keep flying and training. There are people who rise at 4:30 a.m. each day to scour the runways for tiny pebbles that can get sucked into engines and kill pilots. There are people who practice rushing into a flaming mockup of a crashed aircraft, so if there is a real accident, they will be ready to save the pilot. In the flying exercises, John realizes there are other pilots who aren't just out to prove themselves -- they are helping him -- watching his back, taking personal risks to cover his mistakes. And he is doing the same for them.

There are no featured audience reviews for Fighter Pilot: Operation Red Flag at this time.