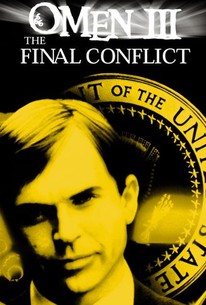 The second sequel to the 1976 horror hit The Omen finds Damien Thorn assuming the full mantle of the Antichrist and preparing for a final, all-out battle with "the Nazarene." Now in his thirties, Damien (Sam Neill) has elevated the family business, Thorn Industries, into the world's biggest multinational corporation. A little bit of black magic paves the way for Damien to become ambassador to England and the head of an international youth council. He soon uses this platform to amass an army of followers to do his bidding. But when Damien notices the confluence of three stars in the sky on March 24, he gets worried about the second coming of Christ. So he orders his minions to kill all the babies born on that day, warning them: "Fail, and you will be condemned to a numbing eternity in the flaccid bosom of Christ." Damien even orders his faithful private secretary, Harvey Dean (Don Gordon), to commit infanticide on his own kid, just because the guy's wife gave birth on the wrong day; a nasty incident involving laundry-room implements soon follows. Meanwhile, Damien romances Kate Reynolds (Lisa Harrow), a beautiful television anchorwoman who feels like a moth drawn to Damien's charismatic flame -- even after he brutally sodomizes her to show her how the world looks through his eyes. Things come to a head when Brother DeCarlo (Rossano Brazzi), one of a secret cabal of monks who have assembled the seven Daggers of Meggido in hopes of assassinating Damien, reveals to Kate that the Antichrist has taken her son (Barnaby Holm) under his wing. Although The Final Conflict was the final theatrical installment of the Omen series, the made-for-TV Omen IV: The Awakening appeared a decade later. ~ Brian J. Dillard, Rovi

Ruby Wax
as US Ambassador's Secretary
View All