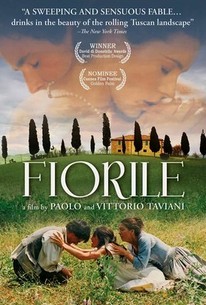 In Fiorile (US title: Wild Flower), Italy's Taviani brothers once again dissect the manners and mores of the Tuscany region. The story is predicated on a 200-year-old family curse. During the Napoleonic era, Elizabetta "Fiorile" Benedetti (Galatea Ranzi) discovers that her own brother Corado (Claudio Bigagli) is responsible for the crime for which her lover Jean (Michael Vartan) was executed. The embittered Fiorile places a curse on the Benedetti family, declaring that none of her brother's direct descendants will ever achieve true happiness. Over the next two centuries, the Benedettis' ill-gotten wealth increases, but they lose the love and respect of their neighbors. In fact, most people prefer to call the Benedetti family the "Maledettis," or the Cursed Ones. The film's final episode occurs during World War II, as Grandpa Massimo Benedetti (Renato Carpentieri), the last family member directly affected by the curse, relates his tale of woe to a pair of youngsters. Will the curse die with Massimo, or will the innocent young ones be forced to carry it into the next generation? Fiorile is not the sort of movie one sits back and relaxes with, despite its leisurely pace; those willing to work with the film, however, will be amply rewarded. ~ Hal Erickson, Rovi

There are no featured audience reviews for Fiorile (Wild Flower) at this time.