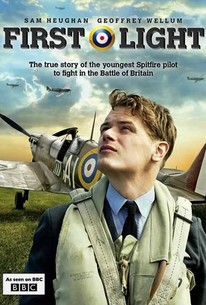 By any standard, Englishman Geoffrey Wellum qualifies as a real-life hero. Born in 1921, Wellum enrolled in Her Majesty's Royal Air Force in August 1939, well before his 18th birthday. Within the mere span of a few months, Wellum began flying dangerous combat missions and demonstrated that rare combination of deft piloting and utter fearlessness in British skies - which helped him not only survive, but win the Distinguished Flying Cross, receive a quick promotion to flight commander, and ultimately, snag a transfer to the Mediterranean, where he routinely led eight spitfire planes over Malta. Then, some 57 years after the curtain fell on World War II, Wellum published his own thrilling accounts of wartime exploits in the autobiography First Light (2002); it became an instant bestseller. This 2010 film of the same title constitutes a BBC television adaptation of the tome; directed by Matthew Whiteman, it stars Sam Heughan as young Geoffrey, and features a supporting cast that includes Paul Kinman and Paul Linto.

There are no critic reviews yet for First Light. Keep checking Rotten Tomatoes for updates!

There are no featured audience reviews for First Light at this time.