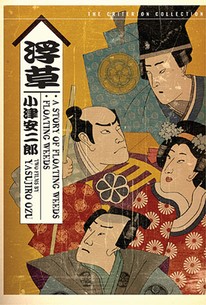 Floating Weeds boasts the visual beauty and deep tenderness of director Yasujiro Ozu's most memorable films -- and it's one of the few the master shot in color.

This 1959 Ozu production centers on the likable but fallible leader of an itinerant acting troupe ("floating weeds" being the Japanese name for such groups), Kimajuro, played brilliantly by Ganjiro Nakamura. The film opens on a lazy, stagnant river as the troupe lays spread about on a boat deck drifting downstream. It's obvious that they're a ragged bunch as they sit fanning themselves and smoking on deck. The boat pulls into a quiet fishing village where the troupe proceeds to canvass the town, hanging up posters and performing impromptu stunts for the inhabitants. Kimajuro and his actress mistress, Sumiko (Machiko Kyo), head to the theatre and secure their cramped quarters above the theatre's main hall. Kimajuro leaves to pay a visit to a local saki bar owned by Oyoshi (Haruko Sugimura), who, years previous, had conceived a child with Kimajuro. The child has grown into a strapping young man, Kiyoshi (Hiroshi Kawaguchi), who has a good job at the post office. Kimajuro, although clearly proud of his son, has refused to take responsibility for the child and Kiyoshi thinks Kimajuro is merely his uncle. Unbeknownst to Kimajuro, Sumiko has discovered his secret, and, infuriated, hires a young actress to seduce Kiyoshi. Terrified that his son is falling for this woman of loose morals, Kimajuro has to decide what's most important: keeping his secret safe or saving his son by acknowledging his paternity. ~ Brian Whitener, Rovi

Ayako Wakao
as Kayo
View All