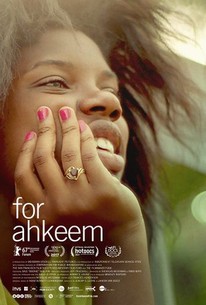 For Ahkeem uses one young woman's stirring story to offer a sobering reflection of the lives of many in modern America.

Beginning one year before the fatal police shooting of a Black teenager in nearby Ferguson, Missouri, For Ahkeem is the coming-of-age story of Daje Shelton, a Black 17-year-old girl in North St. Louis. She fights for her future as she is placed in an alternative high school and navigates the marginalized neighborhoods, biased criminal justice policies and economic devastation that have set up many Black youth like her to fail. After she is expelled from her public high school, a juvenile court judge sends Daje to the court-supervised Innovative Concept Academy, which offers her one last chance to earn a diploma. Over two years we watch as Daje struggles to maintain focus in school, attends the funerals of friends killed around her, falls in love with a classmate named Antonio, and navigates a loving-but-tumultuous relationship with her mother. As Antonio is drawn into the criminal justice system and events in Ferguson just four miles from her home seize the national spotlight, Daje learns she is pregnant and must contend with the reality of raising a young Black boy. Through Daje's intimate coming of age story, For Ahkeem illuminates challenges that many Black teenagers face in America today, and witnesses the strength, resilience, and determination it takes to survive.

News & Interviews for For Ahkeem

Happy Death Day Is Familiar but Fun
View All

Critic Reviews for For Ahkeem

Audience Reviews for For Ahkeem

There are no featured audience reviews for For Ahkeem at this time.