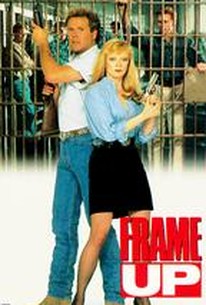 A young mens' hazing turns to murder in this crime drama set in a small town run by a powerful businessman. The victim was beaten to death with a monogrammed baseball bat, and later the head-killer tried to make it seem as if the young man was run down by the car of Frank Govers, a traveling salesman. Sheriff Ralph Baker begins investigating and finds his hands figuratively tied at every turn by the town fathers, particularly the powerful Will Curran. Baker does believe that Govers was framed, but the salesman, who has his own dubious past to protect takes off and ends up hiding out in the cabin of a teen-age wife whose husband has left her. Meanwhile Sheriff Baker arrests Will Curran's son Don, the guilty party in the murder. Back at the cabin, two fugitives from prison burst into the cabin and take the hapless salesman hostage. Things look pretty bleak at this point until Curran breaks his son out of jail and heads for the hills to cut a deal with the escaped convicts.

Dick Sargent
as Will Curran

Critic Reviews for Frame Up

There are no critic reviews yet for Frame Up. Keep checking Rotten Tomatoes for updates!

Audience Reviews for Frame Up

There are no featured audience reviews for Frame Up at this time.