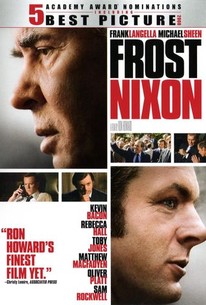 Frost/Nixon is weighty and eloquent; a cross between a boxing match and a ballet with Oscar worthy performances.

Hollywood heavyweight Ron Howard adapts playwright Peter Morgan's West End hit for the silver screen with this feature focusing on the 1977 television interviews between journalist David Frost (Michael Sheen) and former president Richard Nixon (Frank Langella). At the time Nixon sat down with Frost to discuss the sordid details that ultimately derailed his presidency, it had been three years since the former commander in chief had been forced out of office. The Watergate scandal was still fresh in everyone's minds, and Nixon had remained notoriously tight-lipped until he agreed to sit down with Frost. Nixon was certain that he could hold his own opposite the up-and-coming British broadcaster, and even Frost's own people weren't quite sure their boss was ready for such a high-profile interview. When the interview ultimately got under way and each man eschewed the typical posturing in favor of the simple truth, fans and critics on both sides were stunned by what they witnessed. Instead of Nixon stonewalling the interviewer as expected, or Frost lobbing softballs as the truth-seekers feared, what emerged was an unguardedly honest exchange between a man who had lost everything and another with everything to gain. In this film, viewers are treated to not only a recreation of that landmark interview, but a behind-the-scenes look at the power struggles that led up to it as well. Tim Bevan, Eric Fellner, and Brian Grazer team to produce a film adapted for the screen by original play author Morgan (The Queen and The Last King of Scotland). ~ Jason Buchanan, Rovi