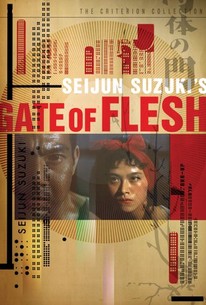 Gate of Flesh is one of the earliest examples of the sado-masochistic soft-core sex films called pinku eiga that would grow by the 1970s into one of Japan's largest, and domestically most popular, genres. Seijun Suzuki directed this gritty, stridently anti-American account of prostitution, set in the black markets and rubble of Tokyo during the immediate postwar era. The story focuses on Maya (Yumiko Nogawa), who finds refuge with a band of hookers living in a bombed-out building who fight for their turf and adhere to a strict, pitiless code: no sex without payment. Those women who run afoul of this rule endure an appalling punishment, largely at the hands of the sadistic ringleader of the group, Komasa Sen (Satoko Kasai). Tension within the group increases when macho ex-soldier Ibuki (Joe Shishido) hides in the women's basement from the US military police after he stabs an American soldier. Drunk on wood alcohol, Maya finds that she can no longer contain her yearning for the renegade hunk, resulting in trouble for both of them. The film lurches from a social realist portrayal of the hardships of the post-war slums to a lurid dreamscape of sexual desire perverted into brutality, realized by Suzuki's boldly expressionistic use of color, camerawork, and design. The result is a film as thrilling as it is repellant. ~ Jonathan Crow, Rovi

Kayo Matsuo
as O-Miyo ("The Jeep")

Tomiko Ishii
as O-roku ("The Idiot")

Critic Reviews for Gate of Flesh

Audience Reviews for Gate of Flesh