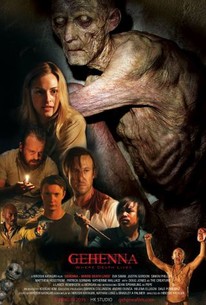 Paulina and Tyler visit Saipan to locate the ideal property for their new company resort. After finding the perfect location, they discover a hidden cave on the property and decide to explore with Alan, their local coordinator, and his assistant, Pepe. The cave reveals a long abandoned Japanese military base, dating back to WW2. Further investigation uncovers several dried up corpses, but curiosity outweighs fear and they walk further. From the darkness, an elderly man approaches; a man barely recognizable as human. Horrible deformities ravage his frail body, as if he had been living in the cave for his entire life. Alan panics and pushes the old man backward, sending him crashing into the wall with a force that ends the old man's life. A deafening explosion sends rocks and rubble everywhere. The intensity of the turbulence shakes the entire cave, knocking the group unconscious and seals them in the cave. They wake to find the dead body of the old man has disappeared, as well as the other corpses... Desperate to find an exit, they wander further into cave and encounter more sinister secrets in it depths. As the various sources and clues unwind the cave's mysteries, they'll learn that the most shocking conclusion still awaits them...

George Kamea
as The Porter