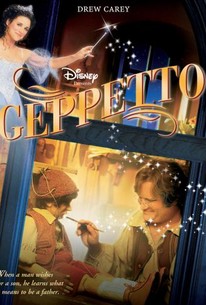 Wise-cracking, beer-drinking comedy star Drew Carey makes a change of pace as he tops the bill of this made-for-TV adaptation of Carlo Collodi's classic children's fantasy. Geppetto (Drew Carey) is a bachelor woodcarver who loves children, but has none of his own. As he works on a wooden puppet he calls Pinocchio, Geppetto sadly wishes he could have a son; the Blue Fairy (Julia Louis-Dreyfus) decides to grant his wish, and Pinocchio comes to life. Geppetto is thrilled, but he soon discovers that taking care of the little wooden boy is more trouble than he ever imagined. As Geppetto struggles with the responsibilities of parenthood, Pinocchio is kidnapped by Stromboli (Brent Spiner), a traveling puppet master who wants to use the enchanted marionette in his traveling show. Though Geppetto has become disillusioned with his abilities as a father, he can't let Pinocchio be stolen away by an ill-meaning stranger, and sets out to find the wooden boy. En route, Geppetto meets a number of strange and remarkable characters, including the inept magician Lazardo (Wayne Brady), the mysterious Professor Buonragazzo (Rene Auberjonois), and the Ring Leader (Usher Raymond), who spirits wayward boys away to Pleasure Island. Geppetto features several original songs by Steven Schwartz; the film was produced for the ABC television network, where it first aired on May 7, 2000.

Julia Louis-Dreyfus
as The Blue Fairy

There are no featured audience reviews for Geppetto at this time.