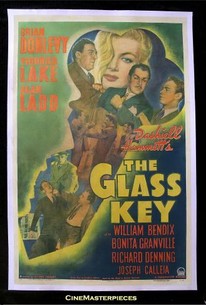 Dashiel Hammett's The Glass Key, a tale of big-city political corruption, was first filmed in 1935, with Edward Arnold as a duplicitous political boss and George Raft as his loyal lieutenant. This 1942 remake improves on the original, especially in replacing the stolid Raft with the charismatic Alan Ladd. Brian Donlevy essays the role of the boss, who is determined to back reform candidate Moroni Olsen, despite Ladd's gut feeling that this move is a mistake. Ladd knows that Donlevy is doing a political about-face merely to get in solid with Olsen's pretty daughter Veronica Lake. It is Ladd who is left to clean up the mess when crime lord Joseph Calleila murders Olsen's wastrel son Richard Denning and pins the rap on Donlevy. As Ladd struggles to clear Donlevy's name, he falls in love with Lake--when he's not being pummeled about by Calleila's psychopathic henchman William Bendix. Far less complex than the Dashiel Hammett original (and far less damning of the American political system), The Glass Key further increased the box-office pull of Paramount's new team of Alan Ladd and Veronica Lake.

Stanley Price
as Man in Barroom

Kenneth Chryst
as Man in Barroom

Lillian Randolph
as Entertainer at Basement Club
View All

News & Interviews for The Glass Key

Critic Reviews for The Glass Key

Audience Reviews for The Glass Key