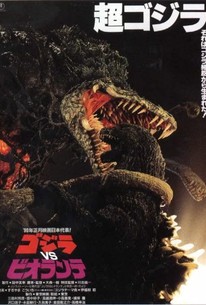 Four years after Toho's semi-successful re-launch of their Godzilla series with Godzilla 1985, the studio released this vastly-superior sequel. In the chaos following the Green One's rampage in the previous installment, clean-up crews discover a large quantity of sloughed-off cells from the radioactive behemoth, which become the source of some international intrigue as agents from a fictitious nation nab a quantity of the cells from American mega-corporation BioMajor. The cells fall into the hands of obsessed scientist Dr. Shiragami, who intends to cross-breed them with plant life. After his daughter is killed in a sabotage attempt by BioMajor, Shiragami determines that her spirit has occupied a special rose bush... which, naturally, the loony Doc decides to splice with Godzilla cells, producing a 30-story-tall tentacled rose-monster dubbed "Biollante." BioMajor pulls yet another stunt, setting off a bomb which releases Godzilla from his mountain prison, leading to the inevitable showdown between the two. Vastly superior effects and a more interesting Godzilla design mark this as a more confident return to form, although the English-language print sports the usual hilarious dubbing, which gives one Japanese executive a thick Southern drawl.

News & Interviews for Godzilla vs. Biollante

Critic Reviews for Godzilla vs. Biollante

Audience Reviews for Godzilla vs. Biollante