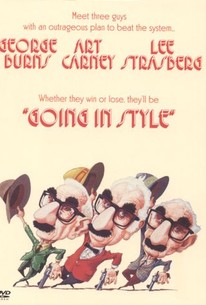 Joe (George Burns), Al (Art Carney), and Willie (Lee Strasberg) are three senior citizens who share a small apartment in New York City. They live off social security checks and spend their days sitting on a park bench, reading newspapers, feeding pigeons, and fending off obnoxious children. It's a dull life, and finally Joe is driven to suggest something radical to break the monotony; why not go on a stick up? None of them have a criminal history (though Joe claims he "did some stealing during the war"), but just planning the bank robbery puts a new spring in their step. Al surreptitiously borrows some pistols from the collection of his nephew, Pete (Charles Hallahan), and the trio, disguised with novelty Groucho Marx-style glasses, pulls off their heist to the tune of 35,000 dollars. Unfortunately, the excitement is too much for Willie, who suffers a fatal heart attack the same day. At his funeral, Joe and Al decide to give the bulk of the dough to Pete and his family, and attempt to blow the rest of it on a whirlwind excursion to Las Vegas. Meanwhile, the eccentric robbery has become a colorful news story for the media and the police are closing in on the amateur criminals. ~ Fred Beldin, Rovi

Constantine Hartofolis
as Boy in Park

Critic Reviews for Going in Style

Audience Reviews for Going in Style

There are no featured audience reviews for Going in Style at this time.