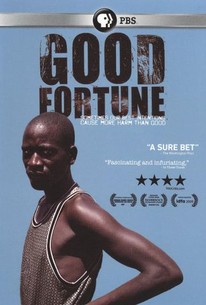 Western nations annually spend millions in dollars in relief efforts for African nations, but the problems of poverty and famine refuse to go away. Is this because of a fundamental problem with Africa, or due to a chronic misunderstanding of the matters at hand by Western politicians and businessmen? Filmmaker Landon Van Soest examines the issues of wealth versus need in Africa and two examples of how efforts to help have gone horribly wrong in the documentary Good Fortune. Jackson is a small farmer who raises cattle in Kenya; the wetlands near his property have provided him excellent grazing land for years, but a large agricultural firm based in Oklahoma has come into the territory to establish a $21 million rice plantation, with the owners claiming the project will bring dozens of jobs to the area. However, damming up the grounds for the project has destroyed the wetlands, putting Jackson and hundreds of other local farmers out of business. And in the town of Kibera, Silva is a midwife who lives in a poor neighborhood; while the homes are primitive and lack modern plumbing, they provide adequate shelter the people can afford. But Silva has learned that the neighborhood is being torn down to create new low-cost housing designed by an American firm, and though the apartments will be low-cost by American standards, they're too expensive for Silva and nearly all her neighbors, forcing them to find new places to live. Along with Jackson and Silva's stories, the film shows how they and others like them have fought to protect their own interests, and why such ill-conceived projects continue to happen. Good Fortune was an official entry at the 2009 Silverdocs Film Festival.

There are no featured audience reviews for Good Fortune at this time.