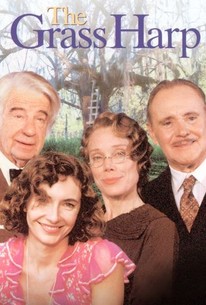 Based on the novel by Truman Capote, this often-witty coming-of-age drama looks at a young man growing up with an unusual family in the Deep South in the 1940s. After the death of his parents, Collin Fenwick (Edward Furlong) finds himself living in a small town with two of his aunts, Dolly (Piper Laurie) and Verena (Sissy Spacek). Verena is the more stable of the two, an entrepreneur who controls a number of local businesses and rules the roost with a firm hand. Dolly, on the other hand, is a gentle eccentric who claims to hear the voices of the dead as the wind whistles through the grass, and has developed a homemade concoction that supposedly cures dropsy. Dolly's potion attracts the attention of Morris Ritz (Jack Lemmon), a smooth-talking con man from Chicago who wants to snatch the formula away from her. Along the way, Collin also gets to know Catherine (Nell Carter), Verena and Dolly's quick-witted house maid; Amos (Roddy McDowall), a barber who is also the town's one-man rumor mill; Charlie Cool (Walter Matthau), a charmingly cynical retired judge with an opinion about everything; and Sister Ida (Mary Steenburgen), an accordion-toting traveling evangelist who has had a heroic brood of 13 children without benefit of marriage. The Grass Harp was directed by Charles Matthau, the son of Walter Matthau.

Edward Furlong
as Collin Fenwick (as a teenager)

Grayson Fricke
as Collin Fenwick (as a child)

Boyd Gaines
as Narrator
View All

Critic Reviews for The Grass Harp

Audience Reviews for The Grass Harp