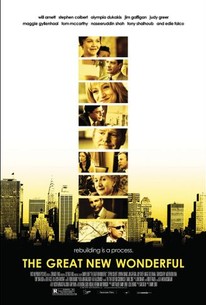 Set in post-9/11 New York, this largely evocative dramedy interweaves the stories of five disconnected individuals who share an unspoken emotional malaise that shadows their attempts at returning to normal life.

A collection of everyday New Yorkers struggle to carry on with their increasingly stressful lives a year after the city was forever changed by the 9/11 terrorist attacks in Brooklyn-native Danny Leiner's ensemble-cast slice of life. Dr. Trabulous (Tony Shalhoub) is a gifted psychologist with a special knack for truly understanding his patients. When an ordinary businessman (Jim Gaffigan) who has witnessed a terrible office tragedy seeks to gain the insight of the seasoned professional, Dr. Trabulous helps to release a hidden rage that has slowly been eating away at the man's troubled soul. Meanwhile, in the culinary world, Great New Wonderful pastry shop proprietor Emme Keeler (Maggie Gyllenhaal) is about to discover that unseating the woman known as the Queen of Cake (Edie Falco) doesn't come without some heavy consequences. Elsewhere in the city, troubled couple Allison (Judy Greer) and David Burbage (Tom McCarthy) fight to save their marriage and break through to their curiously overconfident ten-year-old boy. Avi (Naseeruddin Shah) and Satish (Sharat Saxena) are immigrants and best friends who work together as security guards and wander the city making observations about contemporary America until their opposing perspectives are challenged by an unexpected development in their lives that neither saw coming. And despite the comfort she takes in her daily routine, Julie Berman (Olympia Dukakis) discovers that her passion for life has long since died, until a visit with a childhood friend helps her to realize just what she's been missing all these lonely years.

Will Arnett
as Danny

Tony Kushner
as Himself

Finnerty Steeves
as Isabelle
View All