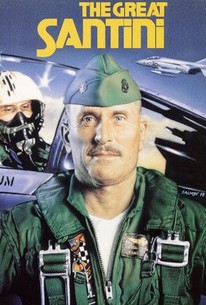 Bull Meechum (Robert Duvall) loves fighting almost as much as he loves the Marine Corps. Profane, cocky, and arrogant, he's a great fighter pilot -- and he knows it. His boss hates his guts, but knows that if he's going to straighten out his lagging squadron, Meechum is the man to do it. The story and irony of The Great Santini is in Meechum's total intolerance of family life and fatherhood. Meechum has a lovely, supportive wife, Lillian (Blythe Danner), an earnest, likeable son, Ben (Michael O'Keefe), three smaller children, and a good home, but Meechum finds the pastoral nature of peacetime totally incompatible with his gung-ho nature. So he begins to drink. He drills his family unmercifully, like recruits. He hammers his son relentlessly until, in a basketball game, his son fights back, and the family cheers Ben's efforts. Tension builds in the household until, during one drunken night, Meechum breaks down. Based on a best-selling novel by Pat Conroy, The Great Santini earned critical raves but fared poorly at the box office. Duvall's performance as Meechum is generally regarded as one of his greatest.

Lisa Collins
as Cheerleader
View All

Critic Reviews for The Great Santini

Audience Reviews for The Great Santini