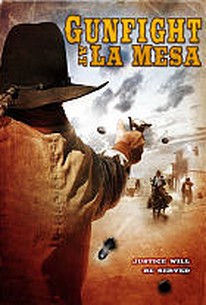 A haunted drifter plots to avenge the murder of his parents by partnering with his oldest friend, who is now the town sheriff. Tate Noble fled La Mesa the very day his parents were killed. Most folks thought he would never return. Now Tate is back, and his childhood friend Samuel is working hard to set things right. When Samuel lands Tate a job on a ranch owned by Harcort Simms, a wealthy local, the vengeful cowboy begins to suspect that his new boss may be just the man he's been searching for all these years. Meanwhile, Samuel uncovers a link between Simms and the mob, and Tate enlists one of Simms' servants to unlock the secrets of the past. In an act of heroism, however, Tate is badly injured, leaving his trusted friend Samuel to ensure that justice is served. But this is a job for more than one man, and when Samuel finds himself in trouble Tate must summon the strength to face his true fate.

There are no critic reviews yet for Gunfight at La Mesa. Keep checking Rotten Tomatoes for updates!

There are no featured audience reviews for Gunfight at La Mesa at this time.