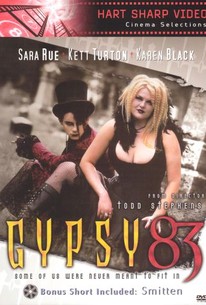 This coming-of-age story of alienated youth is too familiar.

What can help one woman overcome the fears, anxieties, and traumas of a lifetime? Perhaps the music of Stevie Nicks? Gypsy (Sara Rue) is a woman in her mid-twenties who is still emotionally stuck in adolescence; her job (at a drive-through photo processing center) is nothing to write home about, and her one consuming interest in life is the music of Fleetwood Mac diva Stevie Nicks. Gypsy has gone beyond collecting Stevie's records, and loves to dress up like her idol, belting out her songs in living tribute. One of Gypsy's only friends is Clive (Kett Turton), a goofy goth kid still in his teens who enjoys hanging out in cemeteries, where he and Gypsy can sing their Fleetwood Mac favorites for preservation on Clive's camcorder. One day, while browsing the Internet, Clive discovers a website advertising a "Night Of 1000 Stevies" at a New York City nightclub, in which any Stevie Nicks imitator is welcome to take the stage in tribute. Clive is convinced this is an event Gypsy cannot miss, but it leaves them with only four days to get their act together and travel from Sandusky, OH, to the Big Apple. In addition, Gypsy has her own issues to deal with in New York, the city her mother ran off to when she abandoned her family many years ago. Gypsy 83, Todd Stephens' first feature after his breakthrough success Edge of Seventeen, premiered at the 2001 L.A. Outfest, a festival devoted to gay- and lesbian-themed films.