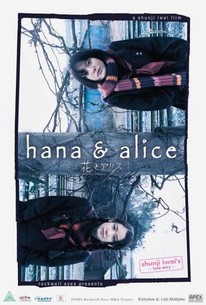 Two teenagers fall for the same boy with unexpected consequences in this popular comedy drama from Japan. Hana (Anne Suzuki) and Arisu (Yu Aoi) are a pair of 15-year-old girls who have been best friends for years. Arisu, the more outgoing of the two, has developed a crush on a boy and they begin dating. So that Hana won't feel left out, Arisu fixes her up with Masa (Tomohiro Kaku), one of her boyfriend's pals. However, after a few months, the bloom is off the rose for Arisu and her beau, while things are going swimmingly for Hana and Masa. Making matters worse for Arisu is the fact she's become quite infatuated with Masa, and one day while she's following him home from school, she sees him accidentally walk into a wall. Masa is knocked cold for a moment, and when he awakes, he sees Arisu, who attempts to convince him that she's actually his girlfriend...something he doesn't recall thanks to a mild dose of amnesia brought on by the accident, according to Arisu. Written and directed by Shunji Iwai, who created the international success All About Lily Chou-Chou, Hana to Arisu began as a series of candy commercials and became so popular as an expanded series of short subjects available online that Iwai adapted them into a feature. ~ Mark Deming, Rovi