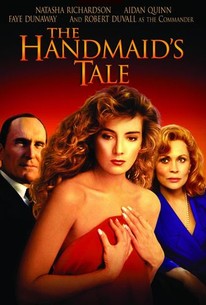 Margaret Atwood's vision of a fundamentalist Christian dystopia is grimly fascinating, but much less trenchant than it might have been. It takes place in a future where pollution has rendered 99 per cent of the women in the U.S. infertile. The country is ruled by a fundamentalist Christian dictatorship, which has sequestered all fertile women to serve as breeders for sufficiently wealthy families. Made slightly after the heyday of the Christian right, the film clearly intended to do for that movement what Orwell did for Communism in 1984 -- to envision the consequences of its ideology. But, the film's imagination is limited, and concentrating as much as it does on the mandated child-bearing relationship of Robert Duvall, Natasha Richardson, and Faye Dunaway, it seems less a satire of a madly conservative theocracy than the more banal story of a maid trying to avoid her boss' advances. Schlondorff does little to enhance the film's apocalyptic intentions, shooting and framing much of it like a gothic romance gone awry. Duvall and Dunaway are as effective as they can be within the ritualized framework of their characters, but Richardon is strangely pallid as an ostensible rebel. Elizabeth McGovern has the best of it as a free-spirited "gender traitor" or gay woman, and her few scenes come as a welcome relief.

Gary Bullock
as Officer on bus

Jim Grimshaw
as Eye in van

Linda Pierce
as Another wife

Muse Watson
as Guardian
View All

News & Interviews for The Handmaid's Tale

Critic Reviews for The Handmaid's Tale

Audience Reviews for The Handmaid's Tale