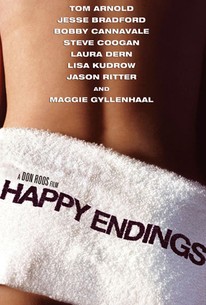 Mamie is being blackmailed. This filmmaker named Nick claims to know Mamie's son -- the one she gave up for adoption -- but Nick won't introduce her to him unless he can film the reunion. Enter Javier, Mamie's massage therapist boyfriend, who convinces Nick to film him instead. Now they're all making a movie about massage. Charley has a longtime boyfriend named Gil. Their best friends, Pam and Diane, once tried using Gil as a sperm donor. They said his sperm didn't take, but Charley thinks those control-freak lesbians are lying. Pam and Diane's two-year-old son looks exactly like Gil. And, it's time to set the record straight. Jude is pissed. Not at anyone in particular. Just in general. When her cousin kicks her out of the house, Jude shacks up with Otis, who's still trying to convince his father, Frank, that he's straight. Frank's a widower. And, he's rich. So Jude decides to sleep with him, too. The last thing she expected was to fall in love.

Hallee Hirsh
as Mamie at 17

Eric Jungmann
as Charley at 16

Rob Macie
as Steve the Lawyer

The Comic-Con is Coming!
Oh It’s Already Been Broughten (Part 3)
View All