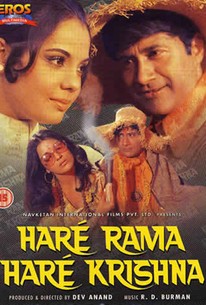 Hare Rama Hare Krishna (1971) Starring, directed and produced by Dev Anand, this outlandish Bollywood story about pot-smoking youths offers an intriguing view of India's attitudes to 60s western counterculture. Set in Nepal and filmed at the height of the hippie era, the action centres on an adoring brother's love for his sister. Separated from each other after their parents' divorce, Prashant (Dev Anand) moves to India and grows up to become an airline pilot; his sister Jasbir (Zeenat Aman) is raised in Canada, but changes her name to Janice and flees to Nepal to escape her unhappy family life. In Kathmandu Janice joins an international hippie commune, becoming one of its key members. On learning of his sibling's new life, the moralistic Prashant decides to rescue her from the attendant drugs and debauchery that are so repellent to him. His quest is hamstrung by his decision to go undercover, as well as by some snarling Nepalese villains, but he does at least meet the girl of his dreams (Mumtaz). However, will Janice even want to be 'saved'? The film has the sort of zany 70s look and pace that inspires popular spoof today, but its great highlight is RD Burman's classic number Dum Maro Dum, sung by Asha Bhosle, which continues to play at Asian clubs across the world, 40 years after its release. This screening is introduced by Dev Anand. In Hindi with English subtitles. M,S.

There are no critic reviews yet for Hare Rama Hare Krishna. Keep checking Rotten Tomatoes for updates!

There are no featured audience reviews for Hare Rama Hare Krishna at this time.